It never surprises me the number of things that occur in and around New York City.  You’d think I’d be used to it by now, but every time I turn the corner, there’s something new. 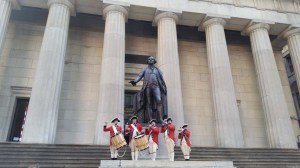 Directly across from the drums and fifes on Federal Hall sat an old man playing an ErHu, a poor immigrant playing in front of the symbol of America’s wealth.

Seoul is a city of contrasts, with historic buildings next to modern ones, all surrounded by buildings that building techniques that are just ancient.   Halmoni’s plan was to take us to Bukchon Hanok Village, a section of Seoul not far from Changdeokgung Palace where the houses (hanoks) were preserved to reflect the feel of the Joseon Dynasty.  Stepping into that little alley feels like steeping back into history.

It’s spectacular, except, as we made our trek from the palace, we passed countless hanoks preserved and being used as homes and restaurants.  The first stop was a mandoo restaurant (serving only mandoo and mandoo guk, of course) a stones throw from the palace walls.  While the dumplings were excellent, I think I spent the entire lunch staring at the plaster and log ceiling and other construction bits of the building.

Many other houses, restaurants, and shops along the way held the same charm.

The street famously photographed in Bukchon Hanok Village is located along the side of a hill, allowing a stark contrast between modernity and tradition, with the ancient hanoks backed by the glass and steel skyscrapers.

As a New Yorker, I felt sympathy for the residents, with flocks of tourists outside, until we were invited inside of one of the hanoks (for a fee) by a tour guide for tea –the residents were spending winter in Peru.  Inside, the traditional building techniques were supplemented by modern fixtures for a unique blend of tradition without sacrificing the comforts of the 21st century (not pictured, the marble and stainless steel kitchen and the tiled bathroom). 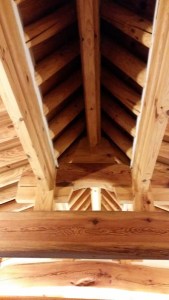 Aside from the tourists, walking around Bukchon is like walking back in time.  A little imagination to remove the utility meters and the power lines, and the quiet streets and ancient architecture suddenly come alive.

Walk a few blocks away, of course, and you reach Insadong, with places like the Ssamzie Mall (one continuous row of shops spiraling around an open air courtyard), full of the bustling energy of youth, selling the latest (and cutesy) trinkets and technology. 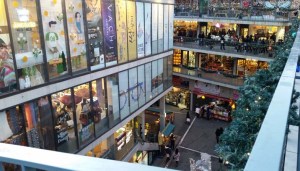 We’ll have to do this part of the trip again, Cookie, since you slept through everything except the hanok tour after lunch.

Our first stop in Seoul, was Changdeokgung Palace (also known as things you may have missed during your nap) 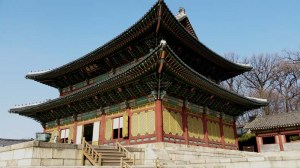 Inside the throneroom (it’s interesting to see the incorporation of electric lightbulbs in a place that would otherwise fit comfortably into ancient history… well, minus the stanchions):

Like any tourist, I spent a lot of time looking up.  The artwork on the roof is exquisite. 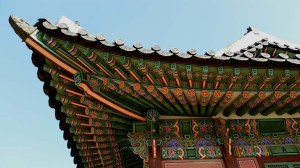 The doorway to the king’s offices, modified to allow a car to park underneath the overhang. 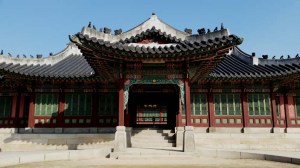 Random courtyard.  It was really difficult to push the stroller (and carry the stroller over the inexplicably tall door jabs while ducking the short door frames) and take decent pictures. I was really thankful for the stroller however, given the size of the Secret Garden behind Changdeokgung Palace.

Inside the king’s bedroom, converted to a meeting hall.  According to the tour guide, there’s almost a national phobia of fire in these palaces, and the incorporation of electric lighting over torches was enthusiastic. 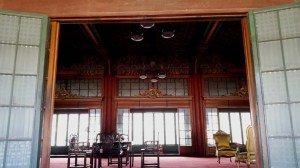 The residence of one of the relatives of the king (sorry, jet lag and sleep deprivation enforced by several kicks to the head from a spinning toddler in the middle of the night has adversely affected my memory).  You’re going to have to find the purpose of this structure, yourself, Cookie.